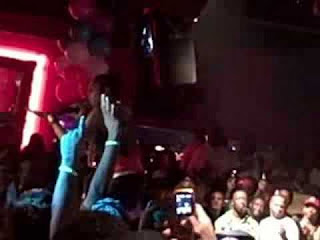 Two weeks ago I was at a gay spot, having my first dance with a dude. A short, stocky, dark-skinned brother with dreads.

“You need to have a boyfriend like me,” he said, rubbing his body against mine as the House music thumped and throbbed.

I almost laughed. I had got hit on by three men already that night and they were beginning to sound and look alike. I wasn’t hurting for sex.

“Dude, I already got boyfriends,” I answered.

He got the message I was not interested. He abruptly stopped dancing with me and walked off. Besides it was near closing time and soon the bouncers were barking at everyone, ordering us to leave.

That’s when I saw “Orlando” across the dimly lit dance floor. Oh. shit.

I positioned my body so another guy was between Orlando and me. To my relief he didn’t see me. He was talking animatedly with friends, heading for the exit. Whew.

Let me explain myself. I have known Orlando since freshman days in college back in the ’80s when Run-DMC was the next hot thing.

He was somewhat effeminate and the guys in the dorm used to tease him unmercifully. But his sexuality was uncertain. He said he liked girls and even had one back in his hometown. You had to take a guy at his word.

I vividly recall one night in the dorm we were part of a group of guys  hanging up late and talking shit. All of a sudden one of them pulled out his dick.

“You know you want to suck this Orlando,” the dude said. The room got quiet.

I remember feeling so embarrassed for Orlando and shocked that a dude would insult another guy like that in a crowd. If a man did such a demeaning thing to you you were supposed to try your best to kick his ass or you would be the group punk until you turned 90 years old.

But Orlando just waved it off. “Man, put your dick back in your pants and shut up.”

Orlando was a light-skinned with curly hair and light copper eyes. The typical 1980s Leon Isaac Kennedy pretty boy. But I realized that day he was stronger than he appeared. He just let the insults roll off him and held his head high. He never argued back.

I always root for the underdog. So I started hanging out with him. He could tell the funniest jokes and always cracked up the room. But  soon  rumors started that we were an item. This may sound odd to you blog readers but back then I had the odd fantasy now and then about laying with a dude, but the desire was not strong enough to act on.

I was trying to get pussy like everybody else.

One day I heard a knock on my dorm room door. It was another good buddy, “Colby.” He walked in and got right to the point.

“Immanuel, you need to quit hanging around with that faggot,” Colby said. “I know you’re not gay but you don’t want folks thinking that shit.”

“Look man, that’s my friend. I don’t care what other people think. Besides, Orlando tells me he is not gay.”

I did care what other people thought — shit I was 19 years old. But I was always a rebel, so I stuck by Orlando and continued to defend him.

A few years later, after graduating college, my girlfriend and I went to a gay club on “straight night” and saw Orlando dancing with a bunch of dudes on the floor.For some reason it made me angry. The next day I called him.

“So you have been gay all this time and I was defending you and you didn’t let me know what was up?”

Orlando coughed like he was trying to clear his throat. Then he got real quiet.

“Immanuel, what do you think I am?” he answered. His voice still had the same calm tone he had used when that dude flashed his dick in the dorm room.

“Well then, if you think I am then I am,’ he answered.

After that we never brought the issue of his sexuality up again. In hindsight I was wrong — how he rolled sexually was his business. I should have never confronted him. He had never come on to me — he had just been a good friend. But I was younger and my pride was at stake.

Orlando continued to play a role in my life. He was even a groomsman at my wedding. My family loves him. Years can go by and we don’t see each other but he calls every Thanksgiving  to wish us a happy holiday. We are even friends on Facebook.

So how I am going to explain to him that I am gay too? Because the next time I go to that club I may not be able to avoid him. I’ll deal with it when the time comes.