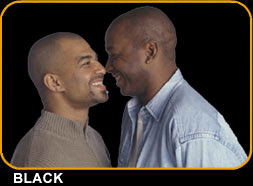 It’s amazing how down-low brothers can turn their sexuality on and off. An encounter a few days ago made me ponder this phenomenom.

This week I hooked up with a married brother from out of town. He was visiting our major metropolitan city to attend some sort of an educational conference. He was originally from the Caribbean island of Guadelupe, and spoke with a French accent.

To look at him you would never know he got down with men. He wore conservative, brown corduroy pants, a suede jacket and baseball cap. He reminded me of some black academic — think Cornel West or Henry Louis Gates.

“This dude is a freak,” I told Rex. “You wont be disappointed. The sex is on point.”

I picked the Caribbean dude up at his hotel room last Tuesday at noon and drove him took Rex’s place a few miles away. In a few minutes we were butt naked on the bed. His skills were very good. First he licked my nipples and then he moved his darting tongue down my body to lick around my balls and asshole. Then he took my long, hardened dick into my mouth and sucked me like a pro.

Rex, who has a thick dick like a soda can, and I took turns fucking Caribbean man. At first his ass was tight but with lots of lube it loosened up. We fucked him missionary style, doggy style, on our sides. We even tried to push both our dicks into him at the same time, but his ass would not yield so we stopped trying, laughing at the failed attempt.

Earlier Caribbean man had said he wanted to take all the dick he could while in our area. He was married and lived in a predominately white town in upstate New York. There were few opportunities to get down with other black men. And when he hooked up with white dudes they usually wanted him to play the Mandingo role and fuck them.

“Oooh, fuck me,” he moaned. “Fuck this pussy. I haven’t had enough yet. Keep fucking me.” He got so heated we didn’t even have to move our bodies — he fucked us by pumping his hips up and down on our dicks. The combination of sweat, lube and his natural juices soon made his ass wet. Rex’s dick made a sound like a teenage girl smacking gum as he plunged into Caribbean man’s ass.

But we had to stop. The lunch hour ended and he had to get back to his conference. We jacked off and came together in the dark bedroom, our bodies lit only by the flickering light from the television.

We showered and I drove him back to his hotel. Then his whole persona changed. He became shy and quiet. The sex starved down-low man who a half hour before wanted two dicks to split his body became just another, nondescript businessman in our town to attend a boring seminar.

“Well, goodbye, hope to see you again if you ever come back,” I said, trying to break the silence. “I can hook you up with my boy and me again.”

But I knew I would probably never see him again. He would go home to his wife, get back in the closet, and push his desires back deep down inside him. Only when he could get away again would his true sexuality emerge again.