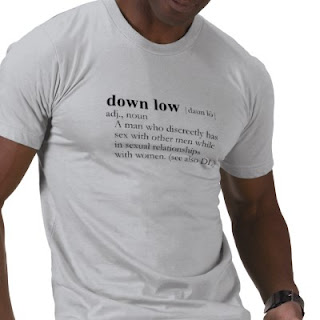 Okay, i’ve been around awhile so I know down-low brothers. Shit, i’m one myself. They come in all shapes sizes and colors –fat, short, tall, skinny and developmentally disabled.

But there are certain characteristics some share. So today I will offer you “Immanuel’s Guide to Down-low Brothers.” Enjoy and feel free to comment and add your own categories:

The Sunday Down-low Brother: These are black men that can only get away to freak with other men on Sundays when their wives are at church serving the Lord or they are out of the house watching football with the boys. Unknown to the wives this football game party at the buddy’s place can involve a little dick licking and sticking. I know a married Jamaican dude who claims this is how he got introduced to down-low sex. He went to the home of a former pro athlete for a Sunday game party. According to the Jamaican guy, he took a break to go to the bathroom and when he came back the guys were sucking each other off. So he pulls out his dick and gets his slobbered down too. And from then on he was hooked on getting oral sex from men. Personally, the tale doesn’t ring true. Why would a former professional athlete invite you to his house and freak with his boys in front of you unless he already knew you were down? I think Jamaican boy knew the deal.

The Church Down-low Brother: You may be surprised that brother sitting next to you in the pew is the biggest freak on the planet. I won’t tell you how many times I have been hit up on by married men in church. This was going on years before I started sexing men. There was this married brother who used to go out of his way to sit next to me at church functions. Then he would lean over on me and rub his leg against mine. I would always get up and move but he would find a way to rub up against me again. When he extended the right hand of fellowship he would hug too long and too close. Even his wife would say, “Could you stop hugging on men like that!” Later he became a minister in the Midwest and would travel back to the area with his wife. They always brought another couple with them and the husband looked suspiciously effeminate. I knew preacher man was fucking him, it was just a gut instinct. Oh, and before I forget, preacher boy went to Morehouse college in Atlanta, the training ground for many a down-low brother. Need I say more?

The Paranoid Down-low Brother: These are the dudes so afraid their wives will catch them they will call you from a blocked-number, meet you in some anonymous fast-food parking lot, and park blocks aways so no one will see their car tag. When you fuck them they sometimes wear disguises like baseball caps and sun glasses – like glasses or a cap will hide who the fuck they are! Some of these brothers have high level jobs and some don’t, so what’s all the fuss about?Avoid them…sex with them is usually stale because they are too uptight to let loose.

“I’m really not gay” Down-low Brothers: Dig it, if you let a guy suck your dick or fuck a dude or let a dude fuck you, you are gay! But there is a class of down-low brothers who split hairs. They will only perform frottage (bump and grind) with you or let YOU suck them off. That way they can say they are not really gay because they haven’t gone all the way. That’s bullshit. They are gayer than hell but just haven’t acknowledged it yet. Like paranoid brothers (see entry above) you should lave this group alone. B-o-r-i-n-g spells boring because they have poor sex skills. Plus they are confused as shit.

The Business Trip Down-low Brothers: These are the kind that only freak when in another city, mainly because they don’t want to be caught by wifey or get identified with the local gay scene. So they freak with dudes when out of town. Many of these guys take jobs specifically so they can travel a lot. Many are long-distance truckers, salesmen bus drivers and railway workers (trust me, I’ve met all these types!).

Masculine Obsessed Down-low Brothers: These are the ones who will not mess with effeminate dudes. They are a lot like the “I’m not really gay down-low brothers.” By swinging with masculine dudes they can say “I’m not really a sissy!”

“I’m looking for a relationship” Down-low Brothers: These are the ones who don’t like doing serial sex and want one regular they can go to. It’s like they are looking for a male wife on the side. I know a Barbadian brother who advises me, “Immanuel go find one dude who will spoil and pamper you.” Barbados guy had a long-term lover. He would go there and get fed and fussed over plus get a good fuck. He even took lover on a mini-vacation. The problem with this scenario is that the bliss didn’t last. When Barbados boy took his boy with him to Vegas his lover told him he was tired of being a married man’s boy toy and broke up with him. They still hung out but Barbados guy was crushed. You see, his boy took the opportunity of going to Vegas to go fuck somebody else, leaving Barbados alone in the room. I think they did a threesome though.

The Superfreak Down-low Brother: I guess this is me. I’m the down-low brother who just likes sex and finds sex with some men can be good. I like one-on-ones, threesomes, groups — it doesn’t matter. I’m not looking for a relationship, just some camaraderie. If the sex is tired or we don’t click, hasta la vista baby! But if its good and we can talk let be buddies. Fuck buddies of course!